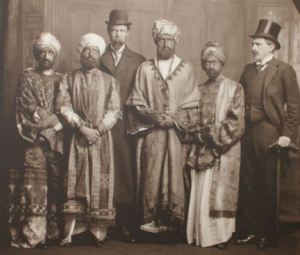 I’ve been back from Turkey for a few weeks now, back in the very un-Turkish landscape of California’s Central Valley. Someone recently at a cocktail party asked me if Istanbul has been informing my writing- it hasn’t, yet, but it has informed my reading. Very much by accident, I picked up, upon my return to the States, a copy of Virginia Woolf’s Orlando, and while reading it, noticed that Woolf knew the geography of Istanbul pretty well in sections where Orlando plays a role as an ambassador to that city. I did some lazy research and discovered that she had visited Istanbul in her twenties and had marveled at its “difference” from London.

To my pleasant surprise, the gender-switch that Orlando undergoes in the novel, from male to female, takes place in Istanbul. I loved this- and wished I’d known about it during the drag party my Istanbul residency gave me, for which all the attendants showed up in drag.

To my chagrin, Woolf, whom I’ve admired as a feminist voice and literary master, resorts in Orlando to orientalism and glorification of the “Eastern” other- see the perfect and wise tribe with whom the female manifestation of Orlando absconds in the nameless Turkish mountains. A bit of research later, I read, for the first time, about the Dreadnought Hoax for which Woolf, along with members of her Bloomsbury circle, dressed up as “Abissinians” — effectively, in brownface– and spoke gibberish and convinced the British Royal Navy to give them a tour of their prized ship (see the photo above).

The hoax triggered a memory for me, from 1989, when, as an eleven year old, I’d been dragged by my family on a cruise down the Nile from Cairo. We were the only Arabs on the ship, and one night, in Luxor, we were asked by the ship’s “art director” if we wanted to participate in a play about the Pharoah Hatshepsut– in keeping with my gender-flipping theme, Hatshepsut was the first female King of Egypt, and ruled for 22 years. My family, always eager to be seen as not-Arab, agreed. On the ship that night, I wore an ancient Egyptian headdress (a cheap, braided wig), kohled my eyes excessively, and wore a wide bangle. In other words, I was a child playing at womanhood; a brown child in brownface.

What do we do when a writer we admire wrongs us? Do we forgive her because she was a product of a time and a place? Do we criticize her? Do we write our own stories as a letter back to her? And what of the larger world, that, like the art director and his Western audience on that ship in Luxor, further others its others? And what of those of us who allow ourselves to be othered?

In Istanbul, I was shocked by my own loneliness. I spent the Summer surrounded by a language I did not understand. When people asked where I was from, I told them- California, by way of Texas, by way of Palestine and Egypt. I thought my Arabness would somehow ingratiate me, but it did not. I remained an outsider, living in a very male, industrial neighborhood, where I was almost exclusively the only woman walking down the street. For the first time in my life, I desired invisibility, or a cloak of maleness to get me by, at least until I reached more diverse and open neighborhoods.

In that sense, I wanted to be my own Orlando. And maybe, for those brief weeks, I was.